An Elegy to Sheffield for 2016

An Elegy to Sheffield for 2016

This is a poem I wrote around 20 years ago – having visited Meadowhall today and experienced again the emptiness of what is, to all intents and purposes, a temple to consumerism I was reminded of this piece. It came from a walk with a wonderful man named Inderjit Bhogul around the Don Valley. He walked us from the Flower Estate, an area at that time with real deprivation, to Meadowhall and then on down the Don. It was such 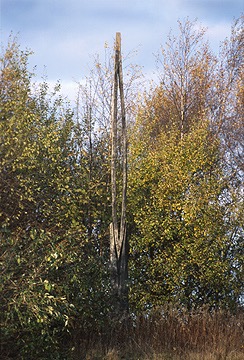 a shock to see how many are excluded from this palace of capitalism, in fact without rampant consumerism the whole edifice would fall, even though it creates constant bubbles that rather like champagne leave you with nothing but a hangover. Unfortunately a hangover that hits those who cannot drink it the hardest. The sculpture is still on the river Don if you want to see it, and having seen it 20 years ago – straight after the glitter of the shops I couldn’t shake off the saying of Jesus about a camel and a needle. Happy New Year to anyone who reads this and here’s hoping we can find a fairer way to run our world in 2016.

The Needle on the Don

The needle’s eye blinks through the rain.

its needling made a pointly finger

in the parting beeches standing round.

Once the cloud’s scalded tears swelled

the Don, stung by the great blasting

furnaces of Atlas, the steel world on

his shoulders. The smelters are melted

now, gone the way of all iron to the

scrapping merchants in their rusted lands.

a steelworked past, the fig trees sprouting

from excreted seeds. Germinated in Vulcan’s

to foul and warm the sweet waters of Rivelin

and Sheaf. The fig bears no fruit now,

and its leaves cannot cover our trespasses.

But we are still Danu’s children, not the Cossacks

she mothered in Russia, where the Don

her balm heals the lands of once war-torn Europe.

We are the grime-stained survivors from

But Danu is older than false Boudicca

and has rusted her callous chariot.

Now we must go to the birthing Pennines

whose springs are a cradle of kindering.

To be born of her crucibling womb, cast in

her image, flowing stoically to the disused

anthracite plains, carrying our lost to the sea.

Reaping revenue from retail replicas and

streets that look the same from Pittsburgh to

Pitsmoor. The needle blinks on through the rain.

The blinking eye sees all.

cheek by jowl to pavestone pilgrims

bound for the meadow’s hall.

A cathedral in green cupolas,

man hand made it, we consume it.

What the needle’s gaze sees is that

we have unsighted ourselves, we are blind;

great Vulcan and Atlas are eyeless in Brightside.

No seeing child will lead them temple wise

to put their Samson backs against

the false pillars of mammon and push.

Instead Danu’s children pour into the basilic maw

to the glittering plenitude of the horns of making.

The worship of these goods mars and scars them,

each homecoming a fruitless consummation.

The speakers blare muzak and messages

declaring us all rich now – rich in credit,

rich in debt, rich in things but not in living.

Downriver, the brambling of ruined houses,

electricity off, disconnected and sealed shut.

Where flowers grew in wide estates

riders have no joy, burnt out in scorched abandon.

The needle’s eye blinks on the rain-washed

wilderness, a silent invitation to another path.

callous up the fleshy hand with the labour

of another birth. The work of handholding

through the dark, of candle making with local

tallow, of carving with peaks of stone a new

city for Danu’s children. A place of creating

and not consuming, of the commerce of our characters,

not our goods. Of a life assayed and hallmarked

made in Sheffield, a dream of steel and stature.

The river’s arms are full of divining

compassion that nurtures our dignity

and fashions a freeing cast to our steel.

The shoppers return on bus and tram;

when the shopping is done, what then?

A city of steel but no alloy,

can we heat the crucible again?

The needle’s eye blinks on the Don,

But who will pass through it?

Written after seeing the sculpture The Eye of the Needle  by David Nash on the bank of the River Don near Meadowhall in Sheffield. The Don derives its name from Dôn (or Danu), a Celtic mother goddess.

From The Call of the Unwritten – available at My Website

Lovely evening for a walk

Feels like a bereavement- a closed and moribund Jo

Out for a birthday brunch - happy birthday Wilma x

Sharrowvale Cat - this is my bit of pavement and I

Splash of colour in the sun soaked valley

The old Bell Hagg in the background with a heap of