The Vow of Vulnerability

The Vow of Vulnerability 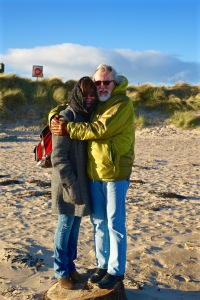 I have been somewhat overwhelmed by the reaction to the post ‘Now I am 54’ after it was graciously featured on ‘Freshly Pressed’ It seems that many of us are sufferers from anxiety and depression or stand alongside someone who is. Below is a poem that sums up why I wrote that piece and I dedicate it to my wife. We are pictured here on a wintry Alnwick beach in Northumbria. I had just emerged from A&E because I had an attack of palpitations and had come to the dawning realization that somehow this was just anxiety and that I was, really, doing it to myself by obsessively focussing on it. I say just because although anxiety is often physically and mentally traumatic, it is just that ; anxiety. It was not the battalions of conditions my fevered imagination conjured in my mind. In the end I thought ‘sod it lets go’ as we had planned a little personal pilgrimage to Ashington in Northumberland to see the Pitmen Painters exhibition. Everything in me except a rebellious sliver of my deep self, said don’t go, you know it will be awful. Yet go we did. The Pitman Painters were miners in the 1930’s who went to Art Appreciation classes laid on by the Workers Education Association. The tutor thought it best to teach by doing, and thus had them making Lino Cuts and then on the heels of these putting paint on hardboard, old doors or anything that would take a picture (see The Exhibition for details). There is a brilliant play called the Pitmen Painters by Lee Hall in which he tells the creative pitmen’s story, Wikipedia link to the play  – see it if you can. Well my Dad lived in Ashington during the time the play is set in, (he was born in 1910) and must have known or known of these men. My Dad died in 1973 and I felt, in my vulnerable state, a need to reconnect with him and the people he grew up with. I am so glad I went, though I was shakey, my wife and children sheltered my vulnerability and I took another step to recovery. We are, as you can see in the photograph, a shelter to each other. It is this simple love that holds us while we feel the vicissitudes of the storm, and if we can ask it from them, it is that sheltering love leads us out the other end. My poem honours the great practitioner of vulnerability; St Francis, a man beyond religion, who showed the way to honouring our world and to feeling ourselves part of nature not above it or an enemy of it. I wrote this before my breakdown and had I known what the grindstone of reality could be like I might not have been so quick to advocate facing it. I do, however stand by the invitation. In Fancis’ time there were walled city-states, like Assisi and Perugia in Umbria, to be outside the walls was to live dangerously. It was to face wild beasts and wild people,- within and without yet the befriending of these shadows led to a generous freedom, the freedom of being your true self. I am listening right now to the Lighthouse Family singing Nina Simone’s ‘ I wish I knew how it would feel to be free’. I am not sure I really do, but I believe the doorway to such freedom is robust vulnerability. Thank you to all of you who have taken the time to share your vulnerability on top of mine, may we walk through the door together. There is a Certain Kind Of Vow There is a certain kind of vow you can only make after writing an autobiography. Not to sell your image like celebrities do, but chiseled with grinding honesty. You do not have to publish—just be readable, tell your story. You do not even have to write it, just speak it aloud, voice yourself in a plain simple admission. Then, when you have it down, courageously recount it to someone else. Not just anybody, but one who has earned the rights to your defenselessness. When you have risked this step, then comes the avowal, the profession. St Francis, we are told made a profession of poverty before the Bishop and his Father. He renounced his clothes, going barefoot into that fierce world of danger and nature outside the city. Yours too, will be a self-sealed willingness to hazard yourself, adventure into the grindstone of reality. Francis called it poverty and then it was institutionalized, neutered, I think we would call it vulnerability. To take only that, which you have found in your story, and walk out beyond your city wall. There is a certain kind of vow that no one can make for you, it is the vow of vulnerability. PS All of this is not offered as any kind of expertise in any of this, but as a fellow human on a journey that is enigmatic and unknown – my reflections are, as Thomas Merton called them, raids on the unspeakable. This Poem comes from my most recent book of poetry ‘Arriving in Magic’ – to get a copy click here. adriangrscott.com